Elena Poptodorova: America has opened a difficult front with Trump’s decision for Jerusalem
07/12/2017 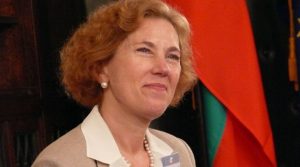 Trump’s decision to recognize Jerusalem as the capital of Israel and move the embassy from Tel Aviv there is very worrying, former Bulgarian Ambassador to the United States Elena Poptodorova told Bulgaria ON AIR.

Immediately after the public appearance of the American president yesterday, a hurricane of negative reactions broke out. The most extreme were the Palestinian group Hamas, which said that Trump had opened the doors of Hell to American interests in the region.

“Not only has America opened a difficult front, but it increases the risk to security within America itself. This is such a good reason for the Islamist movements to mobilize and revolt, “Poptodorova warned.

However, the diplomat stressed that Trump is quite consistently pursuing the promises he made during his election campaign. According to her, it is not his first thought whether he likes his actions or not.

The position of our Foreign Ministry from yesterday is that any change in the status of Jerusalem without Israeli-Palestinian negotiations could have a negative impact. This opinion is shared by Elena Poptodorova, according to whom in this case the attempt is to cut the knot instead of untying it. There is no way to make such a decision without the opinion of all interested parties, Poptodorova said in Bulgaria in the Morning and Palestine are in vogue and have not been around for a long time.

She described as a “right step in the name of good results” the presence of Simeon Saxe-Coburg-Gotha in our official delegation, which visited Saudi Arabia last week. According to Poptodorova, the king opened the doors to Bulgaria, going there with a political and family heritage.

“He can do it with much greater ease than any other politician,” she stressed. Poptodorova is of the opinion that our agreements with Saudi Arabia are rather wishes for a good future. She remarked to our statesmen that they should have better prepared their visit in terms of minimizing the damage, given the flight of our government plane diverted from Iran.