Elena Poptodorova: The Bulgarian position on the Skripal case betrays fear of Russia
31/03/2018 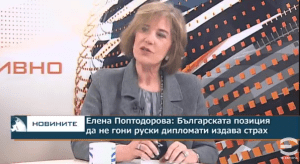 Bulgaria’s decision not to pursue Russian diplomats from the country and to play the role of a bridge between the EU and Russia, after the complicated relations in the Skripal case, betrays fear and dependence. The comment was made in the program “Exclusive” on Television Europe by the vice-president of the Atlantic Treaty Association and former ambassador to the USA Elena Poptodorova.

“Bulgaria still cannot emancipate itself in a positive, good sense. She simply manages not to be dependent in such difficult political decisions on the consequences she fears. I’ll tell you something else, it’s such a nice Russian word – unkind. Russia is unkind to Bulgaria and this is nothing new. I mean the inter-allied, Balkan wars, when Serbia was aided and abetted in a war against Bulgaria. I mean the years before 1990. When, and I am a witness, there were strong objections from Russia to celebrate the 1300th anniversary of the Bulgarian state. When the hard times of the accusations against Bulgaria for the assassinations against the Pope came, the USSR literally left us alone. Bulgaria was left alone in a very unfavorable international environment to cope as it can, or rather to cope as it cannot, “said Elena Poptodorova.

The trust in Bulgaria from now on on the part of our partners will be in question, Poptodorova commented.

“What will happen, the most important thing, is the internal trust in Bulgaria will continue to be in question. We do not have real trust from our allies. It is enough just to mention Schengen and we will see “, she added.

According to Poptodorova, there is a reasonable suspicion of Russian participation in the act of poisoning the double Russian spy Sergei Skripal and his daughter.