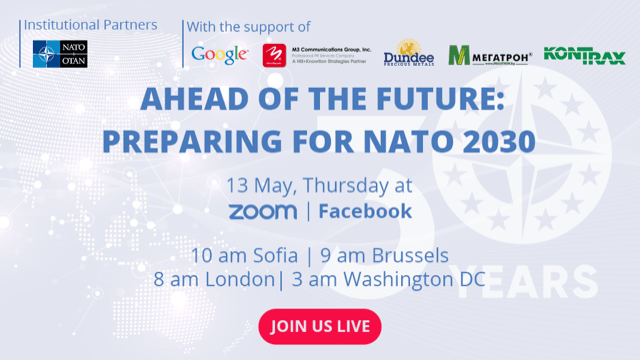 Javier Solana, Lord George Robertson and Jaap de Hoop Scheffer are just three of the keynote guests who will take part in the celebration of the 30th anniversary of the founding of the Atlantic Club of Bulgaria (ACB). The conference “Ahead of the Future: Preparing for NATO 2030”, which will mark the anniversary of the organization, will be held on May 13 (Thursday) at 10 am on the ZOOM platform and will be broadcast live on the AKB Facebook page.

Speeches on the future of NATO will be given by the three former leaders of the Alliance – Javier Solana (NATO Secretary General, 1995-1999), Lord George Robertson (NATO Secretary General, 1999-2003), Jaap de Hoop Scheffer (Secretary General). of NATO, 2004-2009). The panel discussions will be joined by the Chief of Defense Admiral Emil Eftimov, the US Ambassador to Bulgaria Hero Mustafa, representatives of tech giants Microsoft and Google, Deputy Director of Cybersecurity in the UK’s Department of Digital, Media, Culture and Sport Irfan Hermani, Israeli entrepreneur and investor Yossi Vardi, as well as representatives of the Atlantic Council (ACUS) think tanks, German Marshal Fund (GMF), GLOBSEC, Atlantic Treaty Association (ATA).

With the motto “Ahead of the future”, the Atlantic Club in Bulgaria celebrates its 30th anniversary. During these years the organisation has been analyzing and identiying the expected and unpredictable challenges which Bulgaria and the world are facing in the field of security. The focus of the panel discussions will be the Alliance’s strategy “NATO 2030”, emerging and disruptive technologies, security threats in the Black Sea region, the Three Seas Initiative, Space as a new domain of collective security and defense, the race for developing 5G networks, new ideas for NATO’s adaptation to modern threats to peace and security. Building on their experience and expertise, the panelists will propose solutions to new global challenges and unforeseen risks to democracies, giving their perspective and forecast on NATO’s role in these processes.

Anyone with an interest in the topics can follow the discussions live on the Facebook page of the Atlantic Club in Bulgaria.

The anniversary conference is organized by the Atlantic Club of Bulgaria in partnership with the Office of the Konrad Adenauer Foundation in Sofia, NATO’s Public Diplomacy Directorate and with the support of Google, M3 Communications, Dundee Precious Metals, Megatron and Kontrax.