CONCLUDING SPEECH OF HE Xavier Lapeyre de Cabanes, AMBASSADOR OF THE FRENCH REPUBLIC TO BULGARIA 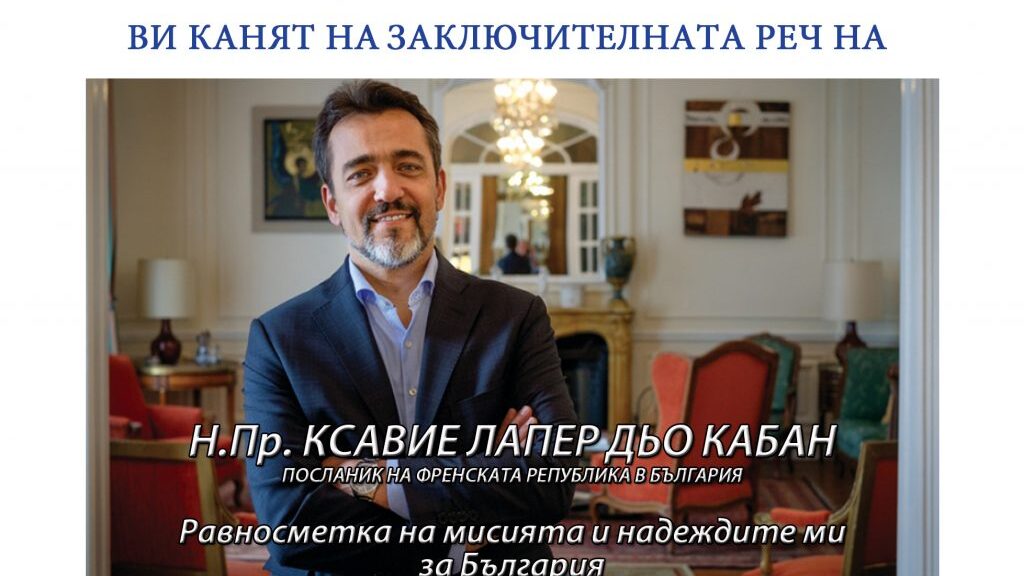 CONCLUDING SPEECH OF HE Xavier Lapeyre de Cabanes, AMBASSADOR OF THE FRENCH REPUBLIC TO BULGARIA

On September 13, 2016, the closing speech of HE Xavier Lapeyre de Cabanes, Ambassador of the French Republic, on “Balance of my mission and hopes for Bulgaria”. The event was held in Sofia Hotel Balkan (Sheraton) and was organized by the Atlantic Club in Bulgaria. The President of the Atlantic Club, Dr. Solomon Passy, ​​described the ambassador’s speech as “apple” because of the remark of HE De Caban on the “rotten apples” in our judicial system.

The ambassador pointed out that the relations between Bulgaria and France are extremely saturated in all areas. N.Pr. De Caban described as his “personal victory” the Thracian exhibition organized at the Louvre, which showed the French this culture unknown to them. He emphasized the idea that the peoples of Europe must work for their rapprochement because they share a common destiny despite their cultural differences.

According to HE De Caban “the lack of research, understanding and study of the reality of communism” is the main reason that pulls our country back, and it is precisely the lack of responsibility and understanding of the regime that makes young people leave the country.

He praised the Bulgarian youth for their progressiveness, but also warned them that if they emigrated, they would leave their country to the oligarchy.

The ambassador said that despite the totalitarian regime and the failure of the transition, he believed in Bulgaria and its future generations.

You can watch a video with the speech of HE Xavier Laper de Caban here.