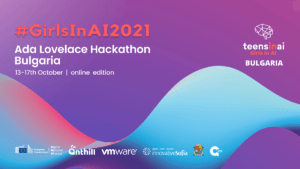 In October nearly 20 countries such as Hong Kong, Pakistan, Syria, United Kingdom, Kenya, Nigeria, Italy, USA, alongside with Bulgaria and many others conducted the hackathon Girls in AI which is dedicated to the first programmer in the world – Countess Ada Lovelace.

This Sunday (17 Oct.) ended the Bulgarian edition which lasted 5 days which the DNA organized alongside with Anthill and the support of VM Ware, the Digitalization, Innovation and Economic Development Department of Sofia Municipality and Sofia Tech park.

More than 50 children from Bulgaria took part in it and 9 teams were formed. They consisted of participants, mentors, specialists in spheres such as business development, design thinking and software engineering.

The children had 5 days to get acquainted with the meaning of artificial intelligence, social entrepreneurship, which the global goals for sustainability are and how can we use technologies to change the world for the better.

The team which became the local winner presented its idea for handling the problem with the illegal deforestation and poaching which are directly related to goal number 13 from the Sustainable Development Goals of the UN – Climate Action.

The team consisted of three girls between the age of 12-17 years and it proposed a development of a hybrid platform which accepts signals for poaching. There will be volunteers and digital birds (drones) which will be able to recognize illegal actions through a camera and artificial intelligence.

After it processes the information, the platform will send a signal to the forestry employees who are located nearby and to the law enforcement authorities.

The project which ranked second in the hackathon was called Bully Detect. Girls “samurai” as they call themselves were part of team number 8. They use artificial intelligence in order to fight with physical, verbal and social violence at school

The idea proposes recognition of a posture of a body, objects, facial expression and sound analysis through artificial intelligence and sending a signal to the teachers and parents in case of violence at school. The project is bound to the Sustainable Goal number 16 – Piece and Justice.

The third place was shared by two teams which offered a game for encouraging recycling of trash and a mechanism for calculation of the most effective ways for the zoo police in Africa so that poacher attacks could be prevented.

In march there will be another edition of the hackathon and the Digital National Alliance plans more initiatives engaging teenagers in activities related to cybersecurity, artificial intelligence and other emerging technologies.