PORTUGUESE PRESIDENCY | The role of Bulgaria 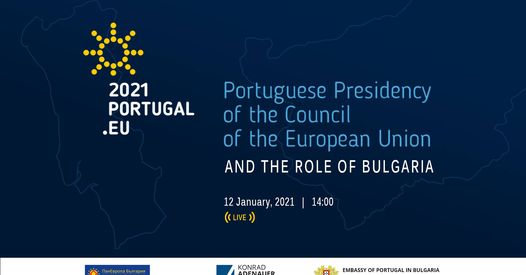 PORTUGUESE PRESIDENCY | The role of Bulgaria

PanEuropa Bulgaria in cooperation with the Konrad Adenauer Foundation held a regular conference to present the forthcoming rotating presidency of the Council of the European Union. The conference took place online on January 12th, bringing together dozens of representatives of the diplomatic corps, NGOs, the media and members of pan-European organizations across Europe. Mrs. Gergana Passy, ​​President of PanEuropa Bulgaria, welcomed the participants in the conference and the new Ambassador of Portugal to Bulgaria – H.E. Anna Maria da Silva. Mr. Thorsten Geissler also spoke on behalf of the Konrad Adenauer Foundation. Ambassador da Silva presented the Presidency’s priorities under the motto “Time for action: a fair, environmental and digital recovery”. The program of the presidency was organized in five directions: – Promoting Europe’s reconstruction, cohesion and values; – Positioning the EU as a leader in climate action – Accelerating the digital transformation for the benefit of citizens and businesses; – Promoting and strengthening the European social model; – Promoting Europe’s openness to the world. The Deputy Prime Minister and Minister of Foreign Affairs H.E. Ekaterina Zaharieva welcomed the presidency and, considering the EU’s priorities for the first half of 2021, confirmed that Bulgaria will support in a constructive way the achievement of the common European goals. She noted the challenging time for Member States to act in unison and solidarity to deal with the economic and social consequences of the Covid-19 pandemic, and emphasized the EU’s united response to protect the health of its citizens.