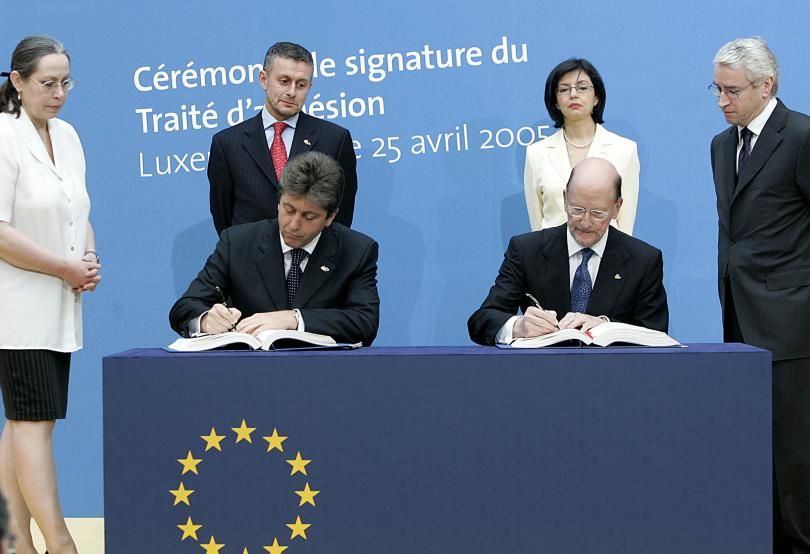 On 13 April 2005, the European Parliament approved the signing of the accession treaties for Bulgaria and Romania, confirming their accession to the EU. Bulgaria received 522 votes in favor, 70 against and 69 abstentions.

The treaty was signed on 25 April 2005 at an official ceremony at the Palace of the Grand Duke of Luxembourg. The document was ratified by all member states of the European Union and entered into force on January 1, 2007, when it is the official accession of our country and our northern neighbor to the European Community.

The famous Bulgarian ensemble “The Mystery of the Bulgarian Voices” announces the beginning of the ceremony in Neumünster Abbey. This is the anthem of Europe – Beethoven’s “Ode to Joy” and sounds for the first time in Luxembourg in Bulgarian.

“United, my country welcomes the accession treaty that the government will submit to the Bulgarian parliament for ratification before the end of its term. Moreover, we will focus on the reforms that are to bear fruit. As we modernize the country, we will once again rely on the support of civil society, trade unions, business and the non-governmental sector. We will follow this path with consistency and pragmatism, “said Prime Minister Simeon Saxe-Coburg-Gotha in his speech in Luxembourg.

Bulgaria’s preparations for joining the European Union have been going on for 10 years. The National Assembly decided that our country should apply for full membership on December 14, 1995. In 1999, Sofia signed a memorandum with the European Commission for the decommissioning of the small units of Kozloduy NPP. One month later, on 10 December 1999, the Helsinki European Council decided to open accession negotiations with Bulgaria, Latvia, Lithuania, Slovakia, Romania and Malta.

The first meeting of the Intergovernmental Conference on the Accession of Bulgaria was held on February 15, 2000 and marked the official start of negotiations.

At the end of 2000, the Council of Ministers of Justice and Interior decided to remove Bulgaria from the negative Schengen list.

At the Copenhagen summit in December 2002, Sofia received its accession roadmap, which set a clear goal – membership in 2007. A year earlier, the last two negotiating chapters – “Competition” and “Other Issues” – were closed and so our country concluded negotiations with Brussels six months earlier than planned. Bulgaria refuses to renegotiate the terms of the Kozladuy NPP and the union offers a generous financial framework.

In the last regular report on the progress of our country there are remarks on the pre-trial proceedings, the fight against corruption, the problems in the police and the prosecution, the state administration, human trafficking. However, European diplomats predict that if we keep pace, we will not activate the safeguard clause to postpone our membership by one year. At the end of the year, Romania concluded negotiations under much more difficult conditions, but together with Bulgaria received a promise to sign the accession treaty in Luxembourg in April.

“This is the best decision Europe has ever made for Bulgaria,” said President Georgi Parvanov.

The agreement enters into force on January 1, 2007, when our country and our northern neighbor officially join the European Community.

From 1 January 2014, the labor market throughout the EU is open to Bulgarian citizens without restrictions.