Elena Poptodorova: I was literally dismembered
12/03/2017 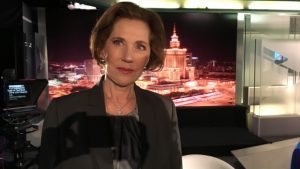 This was stated to Nova TV by our ex-ambassador to the USA Elena Poptodorova in connection with the avalanche of publications on the incident at the airport in Warsaw.

“This is one of my most difficult appearances on the air. I had to gather piece by piece to come to your studio. I was literally dismembered, not just scalded. “I felt disintegrated – suddenly and unfairly,” he said

“Yes, there is an accident. Have I admitted guilt? Yes. Have I paid a price? Yes. I paid a huge price, ”she said.

According to her, due to the handling of many items – phones and outerwear, she found herself with cream in her luggage, which remained intact until he returned to the store.

“The most important thing is that the product is restored intact,” added the former Bulgarian ambassador to the United States.

“I realized there was a jar of cream in my big travel bag when I was on board the plane. There was no way I could go back to the store. ”She was adamant.

“The news is published on the website of a small local radio station. My incomplete names are reported, written in Polish spelling. This is information leaked over the phone. From there, the news appeared in 90 Russian media. Nothing is accidental. I’m not talking about the accident – yes, a serious mistake, I draw consequences for it. I am angry because none of those who stole billions will have such consequences, “Poptodorova said.

“The lack of logical action can show you what condition I was in and that it was not done on purpose. Such mistakes happen to everyone. “- added Poptodorova.

“It’s not about 50 grams of cream for a long time. The conversation is about Elena Poptodorova. Let’s talk about me. There are many faces that I imagine in this aggression and anger, “she said.

“I want to see where those who are really to blame for the damage to Bulgaria, for the stolen $ 10 billion,” the diplomat said angrily.

“There are many reasons why I am in your studio. One of them is that Nova TV has announced as a permanent program to work on the topic of fake news and the fight against it, “she explained.

“620 articles were published on this topic, 40% of them with outright lies,” Poptodorova said.

“This is a huge manipulation, an active event with anonymous sources. I will go through everything, but I will never forgive that the name of my deceased child was involved in the case, “Poptodorova said.

“I will never forgive the abuse of what happened to my dead child. I will not forgive those who wrote about my child. My Yasminka fell not from the fourth, but from the 12th floor. And he was not 4 years old, but 2 years and 6 months old. For half a year, every lunch break after that, my family waited for me to go to the cemetery in the hope that it would appear from somewhere. I couldn’t look after children her age. But I went and reached out to caress them myself, ”she shared through tears.

“I came out of a lot of boiling and boiling water, I will come out of this one. But from this, some servant of interest to make a medical diagnosis – it will not be. She had no diagnosis, no clinics. This is a topic that has yet to be developed, “she said.

She said she would not name the people whose interests it affected, but added that they knew who they were and what positions they had fought for in the United States.

Poptodorova was adamant that over the years she had crossed foreign interests and this was the probable reason for the attack.

“I am unharmed, but it will not be so easy,” she said.

“I was offered to run for president. There were at least two such proposals. And for ex officio prime minister. As for the position of European Commissioner, I only found out that my name was circulating. There were talks, but no formal proposal. “- said Elena Ppotodorova.

“If anything translates me through this worst drama, it was my son’s words, ‘Mom, bad things happen to good people,'” she concluded.