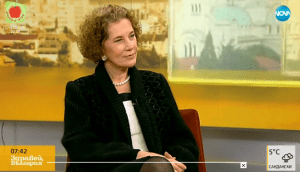 “Donald Tusk is a very high quality politician.” This was said to NOVA by our former ambassador to the United States Elena Poptodorova in a comment on the speech of the President of the European Council, which touched the whole of Bulgaria.

“Tusk’s oratory provoked a lot of thoughts. This is a lesson in diplomacy and much more – a lesson in public speaking. I miss that. For many years I have not heard a real political plea in our country.

Because the attacks and the camp are not oratory “, the former diplomat commented. She stressed that political leadership is first and foremost about being able to speak to your people.

“This government is very lucky with it because of its determination,” Poptodorova commented.

“It will not be painless and it must be explained to people exactly what it means,” the former ambassador said.