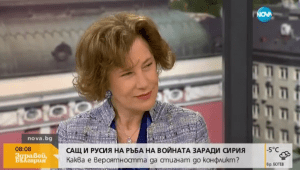 Syria has become a geopolitical Chernobyl. There are two wars going on at the same time. Obviously, some third force is needed that can work to stop the bloodshed there. This was commented to NOVA by the former ambassador of Bulgaria to the USA Elena Poptodorova.

“Donald Trump is acting impulsively. He calls it flexibility and is even proud, “she said. “Only four countries have criticized Trump for the strike – Russia, North Korea, China and Iran. 70 countries condemn the use of chemical weapons by government forces and ISIL, “the former ambassador explained.

“In the loss of human life in this way, it is obvious that the priorities are changing. At the moment, the priority is to save human life and stop this bloodshed in Syria, “Elena Pop said. – two of the government forces and one of ISIL. This happens after the agreement was signed in 2013 that it will not be used and Russia becomes a guarantor for this, “she explained.

“It is interesting that after this report came out, Solomon Passy said in a television interview that Bashar Assad should be removed by force. He was then summoned to the Ministry of the Interior to be questioned about his application. The reason is interference in the internal affairs of Syria, “said Elena Poptodorova. Asked if she thought there would be more US strikes, she said it would depend on the behavior of all participants. According to Poptodorova, the United States is “not enthusiastic” to continue such attacks.

“I do not think the United States and Russia are capable of waging a real war. The United States has been tired for 10 years. Russia cannot afford it, there are upcoming elections. There is also fatigue from Syria. Both have no interest in war. I do not rule out parcelling of the territories there, “the former ambassador said.