Elena Poptodorova: The formation of a government in Germany is also important for Franco-German relations
14/10/2018 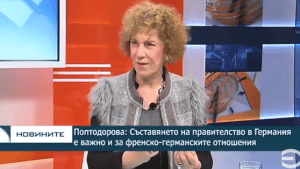 Negotiations to form a government in Germany have been going on for more than three months, but the two main political forces, the Social Democrats and the Christian Democrats, have not yet reached an agreement. According to our former ambassador to the United States Elena Poptodorova, this is due to the reluctance of both parties to form a new broad coalition. However, the importance of a stable government in Germany is great not only for the country itself, but also for its relations with the other major economy in Europe – France.

Elena Poptodorova – former ambassador of Bulgaria to the United States: “Of course,” Germany is the engine of Europe “, it has already become a mantra and it is a real mantra, not just an idea, but a reality. It is also important from the point of view of Franco-German relations so that the Eurozone can move forward, so that integration relations can move forward. There is already a Merkel-Macron relationship. From this point of view, it is in the interest of all of us that Merkel succeeds in achieving this government. “

The most important stage of the negotiations for forming a government in Germany will take place during our EU presidency, Poptodorova stressed. The presidency itself is being discussed on two levels, she added.

Elena Poptodorova – former Ambassador of Bulgaria to the United States: “We have an internal conversation about the presidency – the suggestion that this is unique and from our point of view it is truly historic and truly unique. On the other hand, there is the external conversation, where we have to behave quite normally. It’s as if we can do these things, we know them, it’s just our turn. Let’s not forget that 16 presidencies have passed since the introduction of the Lisbon Treaty in 2009, if the number is correct, but in any case 15-16 presidencies – we are not the first. “

At least for the first two months of our presidency, Bulgaria will have to deal with the uncertainty surrounding the lack of a new government in Germany, Poptodorova predicts.