Elena Poptodorova: The meeting between Trump and Kim Jong-un is historic only because of the fact that it was held
10/06/2018 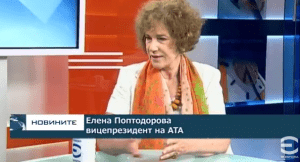 The significance of the first meeting between the US president and the North Korean leader is different for the two leaders. Kim Jong-un sees it as an opportunity for international legitimation of her power and suppression of possible internal discontent, Elena Poptodorova, vice president of the Atlantic Treaty Organization and former ambassador to Washington, predicted in Europe this morning.

Elena Poptodorova – Vice President of ATA:
“Kim Jong Un will seek to achieve these two goals – one – stabilization and opportunities for talks – so that was the first action with the destruction of the nuclear site, but in no case will he lose the powerful weapon of his nuclear potential. For Kim Jong Un, the most important thing is to retain power. It can be challenged from the outside, so it needs the legitimacy of the United States or from the inside, because North Korea can no longer stop information. Even in such a closed country, it begins to receive, it begins to penetrate information, world information.

Donald Trump hopes that the event, which is extremely important in itself, will strengthen his position as a leader of the democratic world.

Elena Poptodorova – Vice President of ATA:
“It’s important for Trump to say – I’m the first to reach out and agree to this meeting – there were even jokes in the media – to bet on who will win the Nobel Peace Prize – Trump or Kim Jong Un, which suggests a lot a clear understanding of the meaning of the meeting and the purpose of Trump. “Trump wants to show that he can be the unique leader of the West, of the Western world, who is already talking to – let me call him – by definition an adversary of the West, such as Kim Jong Un and North Korea.”

After the meeting between Trump and Kim Jong Un, neither the United States should be expected to withdraw its troops from South Korea, nor Pyongyang to give up its nuclear weapons, Elena Poptodorova added. But the event will give a chance to find a solution to the decades-long crisis on the Korean Peninsula.

If you want to watch the whole interview, follow the link below.