Elena Poptodorova: We focus on the EU presidency as logistics, not as goals
16/05/2017 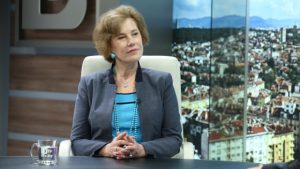 It is worrying that with the total focus on the Bulgarian presidency of the Council of the European Union, and more as logistics, there is still no discussion about the real goals of Bulgaria in this presidency.

This was said by the former ambassador of Bulgaria to the USA Elena Poptodorova in the show “This morning” on bTV.

There is a temptation, and I see that in some of the first speeches – the growing number of people who will be in charge of this presidency. This is also one of the questions – to see if an increased administration, and at a high level, necessarily means a successful presidency.

“In the interest of truth, success is inevitable,” Poptodorova said. – I do not think that there is a presidency that has been reported as unsuccessful. The good news is that the administration in Brussels can always fill in some of the shortcomings of the presidency concerned. That’s why I would be less concerned with logistics, transport, buildings, who will sleep where and whether they will sleep.

According to her, the topics that Bulgaria should raise as President of the Council of the EU are related to the region, because the EU has almost lost the Western Balkans, as well as security, given the idea of ​​European defense.

However, Poptodorova acknowledged that there is an objective weakness related to the Lisbon Treaty, and that it is that the EU presidencies “have lost their full value”. .

According to her, however, Bulgaria could ask for things, such as having an informal council on Bulgarian territory. The absurdity of the Lisbon Treaty is that in fact the leader of the government, the prime minister, has no direct participation, and the line ministers are the actors, Poptodorova believes.

Asked about her opinion on the new government, she replied that “we will all see, I like to comment not on names and people, but on actions.”

Regarding the presence of nationalist groups in the cabinet, Poptodorova said it was “an obstacle that needs to be overcome.” According to her, GERB must discipline its partners. The former ambassador also said that it was “very nice to be at home, whatever the price” and added that the page with the scandal around it was “closed, even sealed”.