“Game of Thrones” in Bulgarian: a conversation with Solomon Passy on the road to the EU presidency
14/01/2018 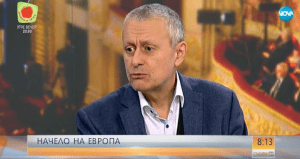 “Game of Thrones” in Bulgarian – memories of negotiations, political tears and a European membership – in the studio of “Wake up” is the current president of the Atlantic Club and former Foreign Minister Solomon Passy, ​​who was like that at the time when Bulgaria became a member of the EU. His political career is directly linked to the negotiations, hopes, disappointments and ultimately the realization of this membership 11 years ago. Only a few days ago, Passy said that Bulgaria is something like the Pope of the European Union.

Is Bulgaria a good or a bad “pope of the European Union”?

The guest said that “there have been no bad popes for a long time”. He stressed that intellectually Bulgaria has been preparing for the presidency of the European Union since 1926, when Prof. Ivan Shishmanov became a co-founder of the Pan-European Union in Vienna, and a year later founded the organization PanEuropa in Bulgaria. Solomon Passy recalled that the organization was re-established in 2002-2003 under the auspices of former Bulgarian Tsar Simeon Saxe-Coburg and the heir to the throne of Austria-Hungary Otto von Habsburg.

“Since then, we have been preparing intellectually and politically for the presidency since 1990, when the founders of the Atlantic Club submitted to the Supreme National Assembly a resolution for Bulgaria’s accession to the European Union,” Passy said.

Solomon Passy explained that there was a real danger that Bulgaria would not sign a treaty to join the European Union.

“Initially, the European Union had set a budget for only 10 new member states,” Passy said.

“Things were pushing that Bulgaria and Romania had to fall,” he added.

He said that this trend has always existed, and was first overcome in 1999, when the then British Prime Minister Tony Blair arrived in Sofia and gave a speech to the Atlantic Club, in which he said he would not allow Bulgaria to start negotiations. for EU membership after the tithe.

“This was his gesture because of Bulgaria’s participation in the Kosovo operation,” Passy said.

According to him, the “positive side effect” of Bulgaria’s actions in this next Balkan crisis is precisely our actual recognition as a Western country.

He recalled that during the 2002 talks, the danger of Bulgaria and Romania dropping out was real.

“The easiest way to drop out was, if Bulgaria had refused, to close the energy chapter in the negotiations with the European Union,” Passy added.

“In a heart attack meeting of the Council of Ministers, we had to decide whether to close the blocs that were agreed to be closed by five governments before, or change the policy of five governments and say we leave the blocs and do not enter the European Union,” he said. the guest.

This meeting took place in the autumn of 2002. A few weeks later, Denmark’s Anders Fogh Rasmussen announced that Bulgaria would receive the 2007 date for EU membership.

The then Prime Minister Simeon Saxe-Coburg played a particularly key role, according to Solomon Passy.

“It was quite easy for all of us to negotiate, because we had the King over us. Wherever and whatever happened, we could call him and ask him to call any head of state or prime minister. “