Passy on the government plane case: Iran is giving a political signal
30/11/2017 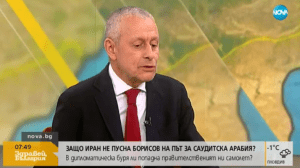 Did the Bulgarian delegation get into a diplomatic storm?
“Iran is giving a political signal, but I don’t think this should be taken very seriously and deeply.” This was stated by former Foreign Minister Solomon Passy after Tehran surprisingly refused to allow the Bulgarian government plane on its territory. The car with Prime Minister Boyko Borissov on board, several ministers and Simeon Saxe-Coburg-Gotha was traveling for the first official visit at such a high level to Saudi Arabia.

“Tehran has a history with the West. There are new and new sanctions that the West imposes on the Iranians, which makes them unhappy. “Ultimately, this is a flight to Saudi Arabia, which is Iran’s biggest enemy,” Passy said.

He recalled the case in 2011 when German Chancellor Angela Merkel’s plane was stopped by Iranian authorities and flew for two hours in the airspace over Turkey before it could travel to India.

“Iran has stopped the plane of Merkel and Borissov. But he will not dare to stop Trump and Putin’s plane, “Passy commented at the same time.

Meanwhile, he pointed out that there are various professional considerations that determine the route of a government flight. In his opinion, this incident is the least important in the visit of the Bulgarian Prime Minister to Saudi Arabia.

Here you can watch the whole interview.