Poptodorova: Kim exposes himself both externally and internally!
13/06/2018 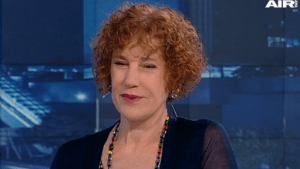 According to former Bulgarian Ambassador to the United States and Vice President of the NATO Brain Trust Elena Poptodorova, without her nuclear weapons Kim Jong Un is exposing himself both externally and domestically.

“Kim Jong Un has his nuclear weapons as a means of extortion and internal domination. He cannot afford to be challenged. “The comparisons of the North Korean leader with Gaddafi and Saddam worry Kim Jong Un,” Poptodorova said in the studio of The Day ON AIR.

She believes that the emotions and euphoria around the meeting must subside in order to get to the bottom of what has actually been achieved and what is written in this memorandum.

“This is only the beginning. It is unknown whether working groups will be set up on either side. If no map is drawn, we must count on the next favorable situation in which the two leaders will meet again, “added the former ambassador of Bulgaria to the United States.

According to Poptodorova, there is a nervousness regarding the meeting between Japan, China and South Korea.

“Both Japan and China have been very restrained about the meeting between Trump and Kim Jong Un. Japan is worried it will be left alone if the United States withdraws from the region. “South Korea also does not want the withdrawal of the military from the peninsula,” the vice president of the NATO think tank told Bulgaria ON AIR.