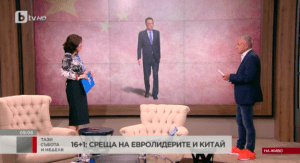 “If we manage to sell each Chinese a match, a jar of yogurt, a drop of rose oil or a glass of Bulgarian wine, that will be enough for a revolution in the Bulgarian economy.” This was said in the program “This Saturday” on bTV by the former Foreign Minister Solomon Passy on the occasion of the “16 + 1” meeting, which is being held in our country.

According to him, the meeting is an exceptional chance and comes as a natural continuation of the Bulgarian presidency of the EU.

Relations between Europe and China are determined by one thing and that is called scale, Passy said.

According to him, we will all lose from the trade war between the United States and China. “She started by saying that Trump decided to become a world leader in protectionism – something that was completely foreign to the United States until years ago. At the same time, the Chinese president said, “I am becoming a leader of globalism.” There was a full exchange of roles, “said Passy.

“I wish the EU was not between a rock and a hard place in this case,” he said.