Solomon Passy: I’m starting to think that the East has already become the future of the West
28/06/2017 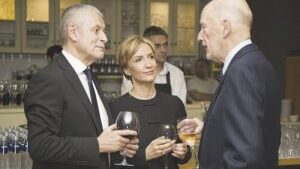 Solomon Passy’s book, which analysts define as a history of the transition in our country, was also presented in Veliko Tarnovo. The publication is called “Articles, opinions, comments, interviews outside the minutes”, and the meeting with the author was hosted by the Regional Library “P. R. Slaveykov ”. The author of the book talks about it – the journalist Maxim Minchev, who is also the general director of BTA. The book is published on the occasion of the 60th anniversary of the President of the Atlantic Club in Bulgaria.

“In my desire to compile this book, I had three powerful allies. The privilege of working with Solomon Passy most of the time. The memory that sealed the long but enthusiastic path of realized dreams and causes. The conviction that gathered together, his positions, opinions, comments and ideas would be not only interesting for people, but also useful for those who are engaged or intend to engage in politics, “said Maxim Minchev. According to him, the book is a textbook on politics and a guide for politicians.

Solomon Passy is a politician, diplomat and international relations expert. Founder and chairman of the Atlantic Club in Bulgaria. Minister of Foreign Affairs of our country in the period 2001-2005, Member of Parliament, member of four Bulgarian expeditions to Antarctica in the period 1993-2005, scientist in the field of computer science.

Solomon Passy is the man who in 1990 proposed Bulgaria to become a member of NATO – an idea then met with ridicule by the majority in parliament. He is one of the guardians of the visit of the late Pope John Paul II to clear the name of our country from the so-called “Bulgarian trace”. He is actively working for our accession to the EU. In 2004, the Bulgarian chaired the OSCE.

In the spring of 2008, Solomon and Gergana Passy presented to the European Commission, the EU Presidency and the EU institutions the idea of ​​standardizing all mobile chargers. The structures of the EU, the World GSM Association and the Union of “World Telecom” accept their justified proposal, which is in force since January 2011, and 3 years later becomes part of European legislation. As a result of their policy, every mobile phone now has USB. This will save more than 20 million tonnes of e-waste and CO2 emissions a year and will help significantly in the fight against global warming.

In 2011, Solomon and Gergana Passy, ​​in a letter to the EC, wanted free, wireless and wired internet to be guaranteed in public places in the European Union. According to them, WI-FI must be a new freedom of the EU, along with the free movement of people, goods, capital and services. For Bulgaria, they proposed to adopt the rule to issue Act 16 in construction only in the presence of free internet. “I am happy that we managed to get this idea through the European institutions and it is even backed by money. The EU has allocated 120m euros to build wi-fi networks between 6,000 and 8,000 municipalities in member states. I want to encourage the Municipality of Veliko Tarnovo and all smaller municipalities in the district to apply for this money and to create a wi-fi network for the Internet. We are really satisfied that this is the second consecutive policy that Bulgaria has managed to pursue through the EU, and this is something extremely practical for every citizen of Europe, “said the former Foreign Minister.

Solomon Passy is also the initiator of the project “Bulgaria and space law look to the future”, which examines the need for national space legislation in Bulgaria. The goals of the project are several – to regain the glory of space power, to create an educational program in space law and to study the legislation of other countries in space law. Another goal of the project is to promote scientific research of students from the Astronomical Observatory in Varna, who were awarded by NASA.

This is absolutely mandatory and was agreed on April 25, 2005. The agreement states that the EU and Bulgaria agree that we will become a member of the Eurozone and Schengen. So this is not such a difficult task and I am sorry that 12 years later this has not yet happened.

“And leaders at the other pole?”
“Margaret Thatcher is one such example.” When I met her in the 1990s, she told me, “Young man, I know you really want your country to join NATO, but you have to forget that for now.” I was shocked and asked why, and she explained to me that Poland had to join NATO first because “we sacrificed Poland by giving it to Hitler, and now we owe it.” So until Poland enters, we should not even think about NATO. She turned out to be right, Poland joined in 1999, and we five years later – in 2004.