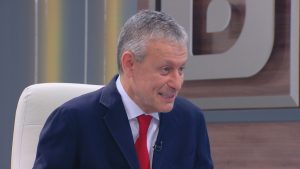 Simeon Saxe-Coburg-Gotha has won a lasting place in the country’s history. Maybe one day historians will call these years the “Golden Simeon’s Age of Bulgaria”. This was said by Solomon Passy in the show “This Morning” on bTV.

Passy was foreign minister in the NMSS cabinet.

NATO and EU membership were signed by the government and personally by Simeon Saxe-Coburg-Gotha, and within his mandate the country “managed to fight and become a member of the UN Security Council, to become chairman of the OSCE, to organize the visit of Pope John “Paul II and to put the case for the medics in Libya on the right foundations, Bulgaria established a cultural and diplomatic institute at the Ministry of Foreign Affairs and opened a mass of embassies,” he added.

Asked whether the hopes of the Bulgarians had been deceived, Passy replied: “Many people expected miracles to happen from NATO and European Union (EU) membership, but miracles do not happen. What we expected happened – our children to study abroad, our roads to become like roads, all of us to go where we want and the whole of Europe to be able to come to work and rest in Bulgaria. “

Asked if these things would have happened if it were not for the figure of Saxe-Coburg-Gotha, the former MEP from the NMSS list Stanimir Ilchev answered that it is difficult to make hypotheses retrospectively, but recalled that “when he accepted the executive power, the king told Mr. Ivan Kostov that he had raised the bar high and this could be understood unequivocally as a recognition of his government (() Let us not forget that our northern neighbors and I were separated from the group of Eastern European countries in terms of EU membership and a collapse in the executive branch and in the legislature could have repackaged us and now we are in the group of the Western Balkans ”.

I have more than once attended various international forums and gatherings where European leaders called Simeon “Mr. Europe”. Then we realized what a huge role the individual has in the development of a country, Passy said.

Of course, our membership in the EU and NATO is not a matter of snapping fingers and three days of work – many generations of Bulgarians gave a lot of themselves, but to a large extent Bulgaria was accepted by NATO and the EU because of the personal authority of the king, Passy said.

“Simeon II is the bearer of the magnificent, but difficult to apply in the Bulgarian environment idea to turn their backs on the collisions of the past, so that the nation will be more productive in its path to the future. And this is confessed by a man who had a dramatic childhood, who was severely traumatized by bloody events (…). I wonder how with such a story, with such memories, you can behave so tolerantly, calmly and equate people, “said Ilchev.

According to him, Simeon Saxe-Coburg-Gotha, who turns 80 today, is in good shape and with “restored that part of his self-confidence, which he started in 2001 and which was then quite eroded by all sorts of events, some of which “Quite unpleasant.”