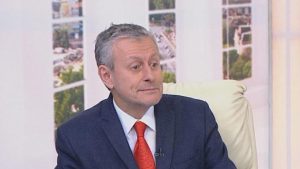 “Indeed, what the North Korean leader is saying is not just a fairy tale. Their nuclear program is developing in full force, “Solomon Passy explained to Nova TV.

“At least the world should want a war with North Korea,” Passy said. “If there are new secret weapons invented that we haven’t heard of, I can’t predict,” he said. weapons known to date, the consequences will be catastrophic.

Passy pointed out that both Pyongyang’s missile and nuclear programs are in full swing.

“The side effects cannot be predicted,” Passy said. In his opinion, Europe should strive to involve the DPRK in some process. Solomon Passy believes that change in North Korea cannot happen if there is no support inside the country.

According to Passy, ​​we should rather seek to involve North Korea in a process similar to the Helsinki one, which once involved Eastern Europe and led to its democratization.

According to the president of the Atlantic Club, the demilitarized zone is completely insufficient to protect Seoul.

“North Korean people need an influx of information,” said the Bulgarian politician, explaining that Europeans have experience with soft measures. He also expressed concern that this war would involve many other countries, mentioning that North Korea has historically had Chinese protection.