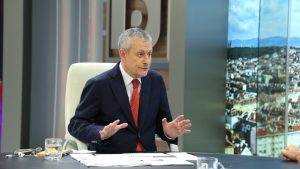 According to him, at a time when there will be no parliament, Radev has appointed a prime minister who is the personification of the parliament.
Passy stressed that the President of the European Commission Jean-Claude Juncker has congratulated Ognyan Gerdjikov for the new position through his Twitter account:

Until now, Gerdjikov and I were friends, but as of today he is “Mr. Prime Minister,” said Solomon Passy.