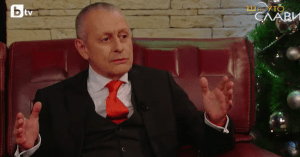 Tonight, the show features former Foreign Minister Solomon Passy, ​​who talks about what it means for Bulgaria to be president of the EU Council.

“A presidency within the EU family is like a family orgasm,” Solomon Passy made an unexpected comparison. According to him, “this act”, which has a predictable duration of 6 months (Bulgaria is chairman from January 1 to June 30, 2018), brings a great national satisfaction, as well as an opportunity for the state to express itself. “If you want to fertilize the EU with your national genetics, with your ideas, to bear fruit, this is more or less the most natural way. And besides – at the end of this process – you, as a country, are extremely exhausted, but you are looking with interest at the next presidency, “Solomon Passy concluded the metaphor.

The founder of the Atlantic Club in Bulgaria said that at the moment our country is something like the Pope of the EU and this is an instrument that should be used well. Asked by the presenter Slavi Trifonov whether there are Bulgarian politicians to use the Presidency to impose Bulgarian interests, Solomon Passy answered that within the Presidency the Bulgarian government has set two important goals – membership in the Eurozone and Schengen membership. Later in the conversation, the guest praised the team that has taken on the Bulgarian EU presidency and noted that he must “give gas” to an important topic for all member states – the creation of a common EU defense.

Solomon Passy also said that the presidency of the Council of the EU presents an opportunity to invite US President Donald Trump, Chinese President Xi Jinping and Indian President to visit Bulgaria. According to Solomon Passy, ​​the realization of such a goal will raise the image of the country.

In the show, Slavi Trifonov presented to his guest the topic of the frequent publications of authoritative European media, according to which Bulgaria is the most corrupt country in the EU. Solomon Passy believes that behind every such publication there is a Bulgarian trace. “I find it a childish act to demand a vote of no confidence in the first days of the presidency, and for what – for corruption. We are sending signals from here that we are corrupt, of course they will imprint there that we are corrupt, “said former Foreign Minister in the government of Simeon Saxe-Coburg-Gotha.

In the conversation, Solomon Passy gave his answer to the question that Bulgarians often ask themselves – what does EU membership bring to Bulgaria. According to him, the money that the country receives through EU funds is important, but it is not everything. “The most important thing we get from the EU and, to some extent, from NATO, is the word ‘opportunities.’ We get such unique opportunities that we cannot get in any other way, and another question is whether we can use these opportunities. Our students, tens of thousands of students, study all over Europe – in the best universities, for free. Think the opposite – Bulgarian universities and schools are wide open to all students, from all over Europe, half a billion Europe can send students to study in Bulgaria, if we are competitive, “said Solomon Passy. He also noted the opportunities that the country can realize through NATO. According to him, Bulgaria can have the best aircraft for aviation – F-35, as well as the best European and American machines for infantry. “We have the opportunity for a Bulgarian shipyard in Varna to build ships for the Bulgarian navy,” Solomon Passy concluded.

Here you can watch the whole interview.