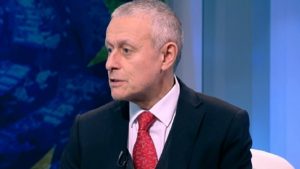 The Prime Minister’s visit to Istanbul is an excellent not only start of the Bulgarian presidency of the European Union, but also a great restart of Turkish-European relations. Solomon Passy, ​​Saxe-Coburg-Gotha’s foreign minister, said this on 120 Minutes.

According to him, as long as the patriots are in the government, there will be no problems in restoring anything in the bilateral relations between Bulgaria and Turkey. “It’s just the alphabet of diplomacy,” he added.

The mosques are cultural sites, some of them are sites of UNESCO and it is normal for the cultural heritage to be maintained in the spirit of some reciprocity, Solomon Passy commented in connection with the opening of the restored St. Stephen’s Church in Istanbul.

In connection with the corruption in Bulgaria and the articles of the foreign media on the issue, Gergana Passy, ​​Minister of European Affairs in Stanishev’s cabinet, said that every Bulgarian who follows the dynamics of this kind of publications has come across the usual clichés about Bulgaria. .

“As a Bulgarian, I feel both anger and sadness, because for 10 years now it has been difficult for us to break away from this reputation label. Of course, without claiming that we are leaving behind only solved problems… I am the last person who will try to mask problems that still exist in the judiciary, I think that the presidency is the most inappropriate moment in which Bulgaria to come out with exactly this kind of labels ”. The church “St. Stefan ”could have been opened a few months ago and a few months later, added Gergana Passy.

“The choice to make this happen right at the start of the Bulgarian presidency is not accidental, and today’s messages, which were sent by the Turkish president and prime minister, were in fact messages not just to Bulgaria, they were messages to Europe.”

And as a member state, it is difficult to close down and hide some of the problems you have. That should not be the goal of the presidency, said Gergana Passy.

“I think it would be a mistake for the government to try to take on a defensive role and explain how we are neither corrupt nor have problems with equalizing living standards.

I would like to see each sector minister come out and talk about the topics on which he will chair the meetings and on which decisions are expected to be made. “

I do not sympathize with the vote of no confidence, because Bulgaria must decide whether to build its image, being proud of the Bulgarian rose and ashamed of the problems with corruption or vice versa, added Gergana Passy.

“What do we say, convening a vote of no confidence in the first or second month of the first Bulgarian presidency of the union?” We say that this is the only major, global problem, and perhaps that we have some solutions to it.

I doubt that any vote of no confidence will lead to any decisions. Even if I theoretically represented the opposition at this time, I would refrain from such an act. The word is not a reduction, there are no new circumstances that require us to convene a vote of no confidence on this topic right now – we know the problems with corruption. “

See more in the video.