Solomon Passy: Putin deals a serious blow to a handful of Russophiles in Bulgaria
13/11/2017 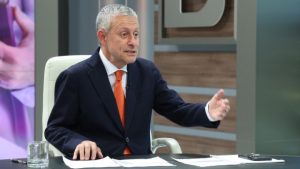 Russian President Vladimir Putin deals a serious blow to “the handful of Russophiles that exist in Bulgaria.” This was said in the bTV program “This Morning” by former Foreign Minister Solomon Passy.

“The long-term trend in relations between Russia and Bulgaria, which began with Putin’s statement that the Cyrillic alphabet is not a Bulgarian alphabet, is worrying. “The statement that the Soviet army, which was thousands of kilometers away, saved the Bulgarian Jews, is the second such and is completely untrue and untrue,” he said.

According to Passy, ​​the Soviet army had absolutely no role and could not play in rescuing the Bulgarian Jews.

“My grandmother, my father, my aunt and my family are participants in this process, they were interned in a school in Plovdiv and had packed their suitcases to take them to the concentration camps. Of course, this question has a very easy answer – the Bulgarian people saved the Bulgarian Jews. However, this Bulgarian people is represented by many institutions and they are the ones who had the main role, “said Passy.

“Of course, the role of Dimitar Peshev can in no way be ignored, on the contrary – he is the leader of a strong political movement in this direction. The role of the Bulgarian Orthodox Church cannot be neglected, it is crucial, it was a moral support and pillar for all those people who expected to be sent to slaughter. There was some minimal role of the Communist Party at that time, which was not she had influence, but she was on the side of justice, “he added.

The former foreign minister also commented on the BSP’s support for MP Ivo Hristov after his scandalous statements. “They have decided to keep the MP – to keep him, they do not profit from that,” Solomon Passy commented.