Solomon Passy: Russia should be spoken to politely, but armed to the teeth
20/03/2018 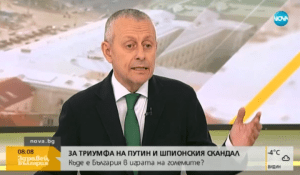 “In order to communicate with Russia, we must start from a maxim: ‘Attacking Russia is madness, not defending yourself from it is even greater madness,'” said former Foreign Minister Solomon Passy in the Hello Bulgaria studio. recommended the West to arm itself.

“The West is many times less armed than Russia, especially in the Black Sea region. “Russia should be spoken to extremely politely, but armed to the teeth,” he added, adding that there should be a NATO base on the Black Sea coast.

“Look at the slogan of the Russian elections: ‘A strong president for a strong state!’ What President Vladimir Putin has been doing in all these years in power – he has demonstrated martial arts, hunting and fishing, being a pilot, being a submariner, he is like a Chuck Norris on the political scene. He chooses March 18 for the election, the anniversary of Crimea’s annexation to the Russian Federation. In Europe, they are strong in words, while in Russia they are strong in deeds, “Passy added.

Regarding Bulgaria’s hosting of the meeting between Recep Tayyip Erdogan and the European Union, he commented: “If Russia had the same good will to negotiate with the EU, it could turn to us, in particular to President Rumen Radev, and say that it wants us to be mediator in the negotiations. Anyone mediating from the EU with Turkey will have approved the sanctions. No EU country has vetoed sanctions, including Bulgaria.

He clarified that sanctions are not a method of negotiating with Russia.