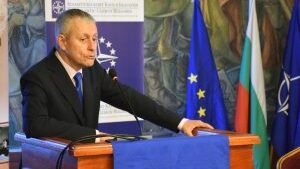 On March 29, 2004, the documents on the accession to the North Atlantic Treaty of the seven new countries (Bulgaria, Estonia, Latvia, Lithuania, Slovakia, Slovenia and Romania) were deposited in Washington. The last date is considered to be the date of Bulgaria’s accession to NATO. The Atlantic Club sends a greeting card to 1,500,000 households on the occasion of Bulgaria’s accession to the Alliance. But the first steps towards NATO were made in the memorable 1990 in the Grand National Assembly. BSP has 211 deputies, UDF – 144. Chairman of the Supreme National Assembly is Nikolay Todorov (BSP). The Prime Minister is Andrei Lukanov. In August this year Solomon Passy, ​​a member of the UDF, proposes to the Supreme National Assembly Bulgaria to integrate into NATO structures.

His speech is based on the findings of his analysis that the USSR and the Warsaw Pact would soon disintegrate.

“Mr. Passy, ​​I want to take you back to those memorable events.” Tell us more about where the idea for Bulgaria to become a member of the Alliance came from?

The idea of ​​NATO membership was essentially justified by one of our conclusions from the 1980s, which people in logic and mathematics would not find very difficult to reach. He came down to the prediction that “the future of the East is the West.” This rule went a little further than Brzezinski’s theory of the convergence of the East with the West, and at least until the Brexit referendum in 2016, it was valid. And in the future we will see…

In 1990, this statement sounded scandalous, but for professional scientists it does not matter, the only thing that matters is whether it is true or not.

Fifteen years after a normalization, it is no longer a sensation. Who sees today as a sensation Liberation, Union, Independence? In a similar way, both NATO and the EU are becoming part of people’s daily lives (as the UN or the OSCE has long been). But unlike the first three, which occurred in 1878-1908 and became part of the national DNA, NATO and the EU still need the nation’s daily enlightenment.

The trans-Atlantic connection – which includes both the Marshall Plan and NATO – has guaranteed peace and prosperity in Europe for more than 70 years – an unprecedentedly long period of peace for our continent. It is also the breeding ground for a sustainable, prosperous and well-protected European Union.

NATO did not allow the USSR to occupy and communicate Western Europe. And all this, combined with the policies of Reagan, Thatcher, Cole and Mitterrand, tore down the Berlin Wall and brought New Europe together with Western Europe.

September 11, 2001, which was dominant for President Bush-son, was the litmus test by which he judged whom to invite to NATO.

In 1990-1999, under Bush’s father and Clinton, Bulgaria supported the United States and NATO in Kuwait and Kosovo (the Atlantic Club made a clear contribution to both.)

But for Bush-sin, decisions were determined by Afghanistan and Iraq. Prime Minister Simeon Saxe-Coburg-Gotha’s letter of September 13, 2001 to Bush-son that Bulgaria was becoming a de facto ally of the United States and NATO in the post-9/11 period, and our work in the Security Council (2002-2003) were a decisive argument for Bush. to send us and implement the invitation for NATO membership.

The geopolitical meridian that separates the West from Eastern Europe has moved east, from Vienna to the Black Sea. If NATO and the EU have as many weapons in the Black Sea as Russia, the West will be calm about its security, and Russia will be spared the temptation to once again satisfy its territorial wolf appetite in the region.

I think it is coming, and new technological challenges offer new opportunities for profiling. By the way, NATO itself has yet to adapt to the cyber and propaganda wars that are in full swing, as well as to the space wars that already seem inevitable!

Definitely yes! We justified it back in 2007, but today this need has become urgent.

Public opinion is a variable parameter, it can depend on everything, even the rain – I recommend to readers my TEDx lecture on YouTube.

But that is why we have a duty to educate society on a daily basis, not to follow it or its irresponsible leaders. Those who brought Brexit are just like that!

If public opinion deviates from reality, we must change it, not it.

Let’s put it this way: The sooner Brazil joins NATO, the sooner Russia will return Crimea to Ukraine!