Solomon Passy: The Kremlin has an interest in secession of Catalonia
23/10/2017 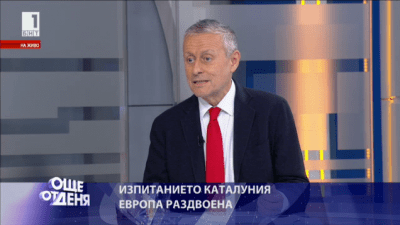 If Catalonia declares independence, it means that it will leave the European Union, NATO, UNESCO, the UN and follow the unhappy path of Kosovo. This was said by the President of the Atlantic Club and former Foreign Minister Solomon Passy.

“If there is a secession of Catalonia, which is purely hypothetical, in the beginning it will be something like a white spot, which will later turn into a black hole. Spain’s richest region will become one of the poorest in Europe. However, the Spanish central government continues to lobby for the Catalan interest in Europe, “he said.

“We, the European countries, must have unwavering support for Spain. We have to say what we would like to hear from them if a Bulgarian region demands autonomy. “The unity of Europe is more important than ever,” Passy said.

The former foreign minister stressed that one of the Spanish government’s mistakes was not recognizing Kosovo. “They tell the world that Kosovo and Catalonia are the same case. The truth is just the opposite. “There is nothing in common between the case of Kosovo and Catalonia,” Passy explained.

He believes that there should be more physical presence of the leaders of the Spanish government in Catalonia. “I have not seen them in Catalonia and I see no reason for them to flee direct conversation with Catalan citizens,” said Solomon Passy.