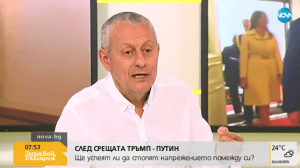 The American president is currently building a circle of friends around him, according to our former foreign minister
“US President Donald Trump has only one goal – re-election in 2020.” This was said on the air of “Hello, Bulgaria” by former Foreign Minister and MP Solomon Passy after the meeting between Trump and his Russian counterpart Vladimir Putin.

According to him, although he dreams of a second term, Trump is taking action that is being criticized.

“It simply came to our notice then. It is a plague and the panacea against it is informed democracy, “Passy added.

He stressed that the owner of the White House is currently building a circle of friends, but not for his country, but for himself.

“Thus begins a thin stratification of European policy in two directions – towards the United States and towards Trump himself,” Passy commented.

According to him, the American president does not want to be a leader of the West and is not a supporter of multilateral diplomacy.

Watch the whole comment of Solomon Passy in the video.