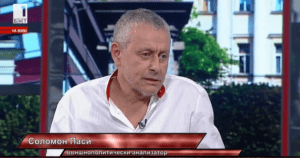 Solomon Passy analyzes where the world is going. In the United States, President Trump is becoming a pillar of protectionism in the economy, while at the same time the Chinese president is strongly advocating globalization in the economy, and this is a huge change since World War II. The world is really taking new directions and we need to orient ourselves in them very quickly in order to be able to get the most out of it.

Asked if a war was possible, Passy said the war with North Korea was highly undesirable but, unfortunately, possible. “What the West-led world is doing right now is imposing sanctions after North Korean sanctions – it’s done in a textbook, that’s the way it should be done, that’s the normal thing. But in addition to these sanctions, in order for them to have an effect, North Korea must be involved, “the former foreign minister said. He spoke of his mediation at the request of the United States as chairman of the parliament’s foreign committee during a visit to the DPRK in 2007, when the heavy water cooling tower at the Yongbyon nuclear power plant was blown up with their consent as an example of engagement. “What is not happening at the moment – there are no attempts to engage,” said Passy. And she gave an example of how she could engage with an example from the experience of Eastern Europe and the Helsinki Process.