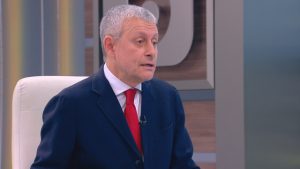 Asked who he thinks will visit Bulgaria first – Donald Trump or Vladimir Putin, Passy replied: “We need an American presidential visit, there has not been one for ten years.”

Relations with the United States are important in one way and with Russia in another, Passy said. According to him, one should not oppose one another’s relations – these are the two sides of the same coin and one country should maintain the maximum range of international relations.

At the moment, it depends on Bulgaria where Europe will go, given the upcoming presidency, he added.

Commenting on Jean-Claude Juncker’s White Paper, Passy said that “in 2015 this document would have been visionary, but in 2017 it is like discussing how you will paint your kitchen between two volcanic eruptions next to you.”

This document does not give the main problems of Europe – migration and the transatlantic connection. It does not say what to do to deal with migration, it does not prioritize it, but puts it on a par with demographics and other issues. The transatlantic connection has some stagnation and even a setback. Europe must lend a hand to America. Until now, the Americans cared about this connection, now the Europeans must take the lead. That is why the agreement to be concluded with Canada is crucial. In the election campaigns, some are threatening to block it – this is absolutely impossible and wrong, Passy said.

He also pointed out that he could not be the next Bulgarian EU Commissioner. “In order to become a European Commissioner, I have to change my gender or at least undergo castration, because Juncker said that he wants a woman from Bulgaria,” he said jokingly.

See the whole conversation in the video.