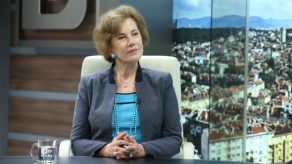 A new tweet from US President Donald Trump marked the crisis on the Washington-Damascus-Moscow axis. “I did not say when the attack on Syria would take place. This may or may not happen soon, “Trump wrote on Twitter. On Tuesday, on the same social network, the owner of the White House warned Russia to prepare for missile attacks against its ally Syria. We talked with our former ambassadors to Washington and Moscow, Elena Poptodorova and Plamen Grozdanov, about whether there would be a US-Russia clash on Syrian territory in the studio of The Day Begins. Elena Poptodorova, vice president of ATA and director of the Atlantic Club, said that yesterday brought new notes and nuances. With his tweet, Trump is trying to ease the tension. Moscow reacts in a similar way. “While the first exchange was a threat from Moscow for a retaliatory strike to fend off such a possible American strike, we see that yesterday the Kremlin commented on Moscow’s future actions in a completely different way. Ie I think it is also true for the forces in Syria that a de-escalation of tensions is being sought, which has risen very sharply and suddenly. “

Plamen Grozdanov, former Bulgarian ambassador to Russia, stressed that we really live in a very dynamic and complex time. The signals broadcast on Tuesday by the United States and Russia were very disturbing. It is good that in the following days the tension gradually eased. “Sweden has proposed a new draft resolution. The Security Council is meeting today. Experts from the Organization for the Prohibition of Chemical Weapons are expected to be in the city of Duma tomorrow. These are steps that show that common sense still prevails. But it is worrying, because everything so far shows that the world we live in no longer has rules. The dynamism is such that there are no rules and mechanisms to resolve sharp disputes, so now it is much more complicated than during the Cold War, when there were some red lines, there were some rules that could be violated and these lines to skip. “Elena Poptodorova pointed out that the 7-year civil war in Syria is not just about the use of chemical weapons. The problem is very big. The current chemical weapons attack in the Duma is a series of such attacks. According to her, at the moment the United States does not have a medium- or long-term strategy. In 2012, President Obama drew a “red line” that he unfortunately ignored, she said. “There are many analysts who believe that if there had been a more decisive action then, today’s events would not have happened. To this day, I believe that with his actions, Assad wanted to achieve two goals: first, to test and, to some extent, even discredit the United States’ deterrence capabilities in Syria. The other goal is to push the rebel forces more decisively out of the areas where they still reside. For me, the interest of the United States there is to prevent the spill of this conflict, to prevent further bleeding outside the borders of Syria, “Poptodorova commented. Plamen Grozdanov was adamant that diplomacy cannot be done through Twitter.