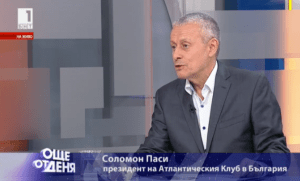 We are talking about global challenges and the Atlantic Dialogues with Solomon Passy, ​​President of the Atlantic Club of Bulgaria and former Minister of Foreign Affairs.

One possible topic is the reunification of the world to bring the United States back to the Paris Climate Change Agreement, Solomon Passy said in connection with the priorities of the G20 summit in Hamburg. With this decision, the United States is losing its global weight, but there is also optimism, as German Chancellor Merkel noted, that this can be remedied. Indeed, according to Passy, ​​the de facto withdrawal of the United States from the agreement will follow after this term of Donald Trump should have expired – that is, it is not an unchangeable reality in the coming years.

As for the much-anticipated bilateral meeting between US and Russian leaders, Solomon Passy does not believe there is a significant difference in US-Russia relations now compared to Trump’s election campaign, despite attempts to push such expectations.

Solomon Passy – President of the Atlantic Club in Bulgaria:
“What happened after President Obama’s eight years in office and now President Trump’s is that the United States has lost some of its role on the world stage. Note that for the first time, a large-scale agreement guaranteeing some form of pacification was reached without the United States. That was the agreement between Russia, Iran and Turkey on Syria. “

This has been impossible since the end of World War II until a few months ago, Passy said. The United States is not involved in another large-scale international economic project, the Silk Road project, which starts in China and heads east. American companies can participate in it, but the United States is not its end point. As for whether we can join after we missed it, Passy believes that “what we missed is recoverable.”

Passy’s dream: Bulgaria to arm itself with F-35

Solomn Passy is convinced that modernization of the armed forces is needed in both the Air Force and the Land, and in the Navy, as the navies are the only ones where Bulgarian industry can participate in the modernization. As for the EU-Turkey relations, Passy believes that ” the right question is “do we want to see Turkey reformed so that its membership is subject to consensus”.

Solomon Passy – President of the Atlantic Club in Bulgaria:
“And the answer to that question is YES, we want to see Turkey reformed in this way, we want Turkey to become part of this family, because Turkey has been part of the West almost since the end of World War II. Turkey joined NATO in 1952, just three years after the alliance was formed. “

You can see the whole conversation with Solomon Passy here.