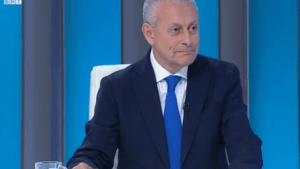 US President Donald Trump has withdrawn his approval of a final communiqué for the G7 summit in Canada and will consider new tariffs on cars. The reaction is part of an exchange of angry tweets after the forum between Trump and Canadian Prime Minister Justin Trudeau. We talked about international politics with the stigma of 2018 in the studio of “The Day Begins” with Dr. Solomon Passy, ​​President of the Bulgarian Atlantic Club and former Foreign Minister.

Solomon Passy pointed out that at the moment we should ask ourselves whether the G-7 is not a G-6 + 1. Since President Reagan, there has been a tendency in American diplomacy for the first visit of a newly elected American president to be in Canada. It was violated by President Trump, who went to Canada only on the 500th day of his rule. Commenting on the G-7 meeting, we need to see what the international context is, Passy said, adding that President Trump is currently absolutely obsessed with his upcoming meeting with Kim Jong Un. At the G-7, the American president demonstrated that he surpassed his 6 strongest allies, which is a direct message to Kim Jong Un and aims to show a firm position. President Trump’s big bet is winning the Nobel Peace Prize. “If he succeeds in achieving what many expect to achieve during his meeting with Kim Jong Un, then he becomes a completely realistic candidate, along with Kim Jong Un for the 2018 Nobel Peace Prize,” Passy said.

On the occasion of the G7 summit and Trump’s statement on the introduction of tariffs on cars, which he justified with a view to protecting national security, Solomon Passy said that this action offends the allies and reciprocally now Canada and the European Union will impose tariffs on United States. “These tariffs will be imposed in states that voted for Trump. Ie this is a surgically selected sample for a political attack. This is not a reciprocal blow to the United States, but a personal reciprocal blow to President Trump. The truth is that Trump is primarily concerned with domestic politics, and he is fulfilling the election promises he made to his constituents quite accurately, both for the relocation of his embassy in Jerusalem and for tariffs and tariffs, “said Solomon Passy.

See the whole conversation in the video.